Then and Now – Innovations of Tunnel Bolting and Grouting

When it comes to safety in any tunnelling or underground project, rock bolting is an effective mechanism for long and short-term tunnel rock support. When work sites require a long-term solution, rock bolting and bolt grouting are used together to ensure the maximum stability and design life of a structure.

Shown above, workers excavating a cable tunnel using explosives and early jackhammers, underneath Sydney Harbour in 1922.

Before modern rock bolting, underground construction was significantly more time-consuming, expensive and dangerous. Propping up the excavated rock was a lengthy process and one which often exposed workers to the risk of a ceiling collapse on a daily basis.

Now, however, tunnels and other excavated structures can be stabilised efficiently and safely using state-of-the-art rock bolts and specialised drilling rigs.

While rock bolts are an essential part of stabilisation, the grout used to hold them in place is just as crucial – particularly in the long term. We’ve developed a range of high-quality tunnel stabilisation bolts which are often used in tandem with our specialised bolt grouts. 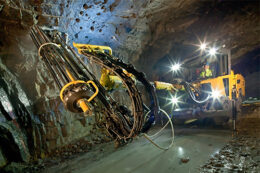 These engineered grouts been developed for applications in Australia, New Zealand and South East Asia and therefore meet a wide range of specification requirements and environments.

Overhead rock bolts present a particular physics issue; they require a grout that is pumped into place but doesn’t simply flow out under the force of gravity.

BluCem HS400, (our thixotropic cementitious grout) meets these requirements. The grout maintains a low viscosity when subject to agitating forces but returns to a highly viscous state when at rest.  BluCem HS400 is able to maintain these properties over a wide water range making it the most reliable product in its class for underground applications. This tolerance to water variation means that a reliable grout will be formed and remain in place even if the water addition is varied slightly.

BluCem HS400 also provides an incredibly strong connection to the rock, featuring a compressive strength of up to 80MPa after a 28-day period (depending on the mixing ratio).

To meet this standard, engineers used 7,000 bags of BluCem HS400 for the bolt grouting of 4,000 overhead roof-support cable bolts. Performance testing of these bolts resulted in a 100% success rate, with no encapsulation failures or bolt pull-outs.

The Support a Project Needs

Product support is only the beginning at Bluey. With a wealth of experience from across the globe, we provide consultation, training and on-site support for almost any civil application. 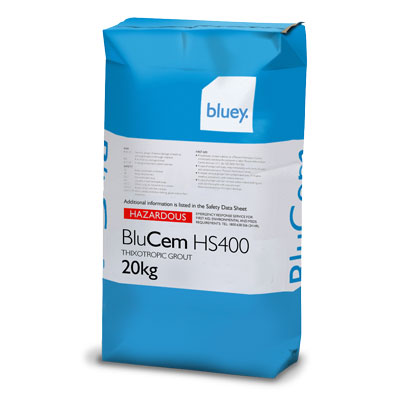