The Roof Goes Up at the International Convention Centre, Sydney

Milestones in the Metro Northwest tunnelling project and the Darling Harbour revitalisation show that infrastructure progress is going strong in Sydney.

The new entertainment, exhibition and convention precinct at Darling Harbour is another step closer to completion with the installation on the roof at Sydney's International Convention Centre (ICC) on March 8. Located on the shores of Cockle Bay, ICC Sydney will provide a world-class setting for events in the city centre.

A premier convention centre in the heart of the city

On track for a December 2016 opening, ICC Sydney will feature a number of facilities, including an 8,000-seat theatre, a 5,000 square-metre outdoor deck with bar and lounge, convention facilities for three events at the same time among other innovations.

The convention centre has also played a large role in boosting job growth in Sydney, with over 7,000 people working on the site and another 2,000 expected positions being recruited for event staffing, according to Andrew Constance, NSW minister for transport and infrastructure.

The centre will be quite busy in 2017, as 50 exhibitions and 40 conventions have already been scheduled for the year. With these bookings, ICC Sydney is projected to contribute $200 million each year to the NSW economy. The convention centre is the main component of the NSW government's larger Darling Harbour renewal project, a $3.4 billion venture.

"ICC Sydney is making great progress – it will truly cement Sydney as the number one place to live, work and do business, and retain its rightful place on the international stage," said NSW Premier Mike Baird.

Mr Baird and Mr Constance were on hand for the roof raising, which was a remarkable work of modern engineering.

Lifting the roof with strand jacking

The roof for the 35,000 square-metre exhibition space was installed using strand jacking techniques, the same sort of method used for stadiums, aircraft hangers and bridge construction projects. Strand jacks were developed in Europe in the 1970s and have since been a key component in a number of heavy-load engineering and construction projects.

The technology was also used for the construction of France's Viaduc de Millau and in the raising of the Kursk, a downed Russian submarine weighing 10,000 tonnes.

A strand jack consists of a hydraulic jack, moveable and lockable anchors above and below it, and a bundle of high-tensile steel cables, which are run through the jack and connected to the load.

According to the Queensland government's report, Strand Jacks in the Construction Industry, up to 80 strand jacks can be safely used for a single project with a combined lifting capacity of over 80,000 tonnes.

ICC Sydney's roof raising got a helping hand from Bluey's BluCem HS200, a high-strength anchor and cable grout that is being used to support the roof. BluCem HS200 is particularly useful and cost effective, as it just requires a mixture with water to create an incredibly strong grout for structural applications. In this application, the grout was deemed by the Engineers to be more suitable than traditional epoxy grouts – resulting in significant construction cost savings.

This grout only takes four hours for an initial set, and boasts a 24-hour strength of 40MPa and a 28-day strength of 100MPa.

BluCem can be used in a number of applications, not just in massive convention centre roofs. Contact the team at Bluey today for more information about BluCem grouting or any of our other civil engineering construction solutions. 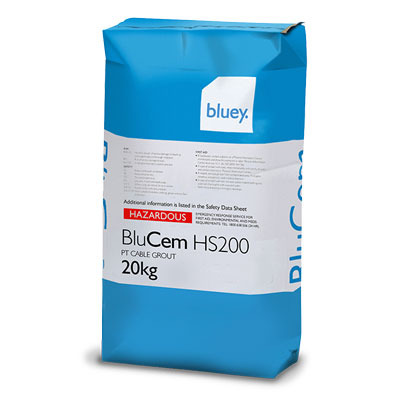