There are a number of reasons that structural foundations weaken and deteriorate. Whether it’s a design flaw, changes in the application, natural causes such as drought, earthquakes or flooding or even just the passage of time; assets need remediation. In the past, when foundations deteriorated, entire sections of assets would be removed and later replaced. Now, however, (when practical) foundations undergo remedial work to stabilise surrounding soils adding use life to the existing structure.

In the case of RMS, a section of the M1 Motorway experienced extensive water infiltration, which caused the slabs to become potentially unstable and dangerous for drivers to use in future if quick action was not taken. The RMS needed a long term solution that not only ensured driver’s safety but also resulted in minimum asset shutdown time.

After an onsite inspection, the Work Method Statement identified that BluCem HE80 grout was preferred over a polyurethane, due to its high fluidity and pumpability, 100+ year durability and rapid strength gain (shown right).

BluCem HE80 was injected at 2-metre radius intervals across the slab to ensure the grout had effectively filled all voids in a controlled manner. This not only consolidated the subbase, creating the desired structurally sound slab but also ensured the slab remained fixed to the ground.

As BluCem HE80 has been designed to be highly flowable to infiltrate joints and cracks, it was the ideal product to repair the M1 Motorway Slabs. The flowable grout offered the most effective solution and successfully rehabilitated the compromised structure, saving RMS and commuters both time and money.

Under slab grouting is fast becoming a popular method to rehabilitate slabs, instead of removing and placing the entire affected area. To learn more about our stabilisation solutions, contact Bluey at bluey@bluey.com.au or call 1300 0 BLUEY. 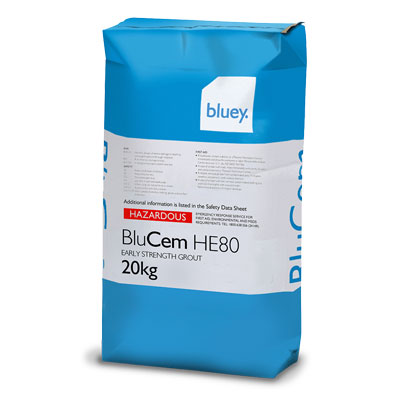