Bluey played a key role in waterproofing the tunnel for the Wynyard Walk project, a major civil engineering project in the heart of Sydney. Read on to learn more about the process.

The project, which includes a pedestrian tunnel, entry building, and bridge will allow people to travel from the Wynyard transport hub in Sydney’s CBD to the Barangaroo waterfront in approximately six minutes, avoiding steep inclines and crossings.

Bluey, an industry leader in tunnel waterproofing, assisted the project in a number of areas, including:

With Bluey’s wide range of products, the on-site engineering team carefully reviewed each product to determine the best solution for the tunnel environment.

Bluey’s expert team of engineers suggested the cast-in high density polyethylene membrane (the capable BluSeal AKS) as it allowed the project team to access the waterproofing layer in the event of a leak.

Water is a constant issue within the tunnelling environment and any issues need to be fixed immediately. The BluSeal AKS can be visually tested post-installation, a contrast to the traditional sandwich waterproofing techniques.

Consumers always have questions about the stability of products and Bluey’s team ensured maximum stability.

Due to the complexity of the tunnel and its 100 year design life, the product needed to meet BCA requirements for the Spread-of-Flame Index, the Smoke-Developed Index or the Flammability Index.

The project team supplied BluSeal AKS samples to the Commonwealth Scientific and Industrial Research Organisation (CSIRO). The solution passed with flying colours and the team were more than happy to take advantage of its benefits.

The tunnel has a deluge system and not subjected to high fire loads which made AKS an excellent choice in this environment.

When the infrastructure is open to the public later this year, pay particular attention to the high quality finishing details.

Bluey is the waterproofing sheet membrane supply and install contractor of choice for tunnel work in Australia.

To learn more about Bluey’s history and wide range of products, feel free to contact our friendly team today. 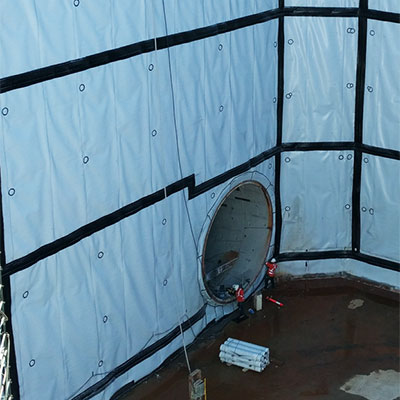