Due to the sheer complexity of civil engineering projects, completing them on time and on budget is always a challenge for businesses involved in this industry.

However, when a project goes well and exceeds the expectations of clients and stakeholders, it is important to recognise the achievement and look into what made the difference.

Willcen Australia’s Engineering Manager Adrian Willingham and his team recently completed work on the Alphington sewer replacement. Located seven kilometres northeast of the Melbourne CBD, Alphington is one of the city’s fastest growing suburbs in terms of population and its demand on local infrastructure is only growing by the year.

To address this, Melbourne Water planned to replace the entire sewer system between the Latrobe Golf Club and Coate Park. The existing sewers are over 100 years old and in past years had deteriorated considerably, resulting in several spills during wet weather and flooding.

Bringing the sewer system into the 21st century was the responsibility for Willcen and a number of other contractors.

Willcen worked on a 1.5 metre diameter pipeline that was installed near the golf course. This particular pipeline was lined with BluSeal AKS from Bluey Technologies and Willcen was involved in joining up the individual pipe elements – around 376 pipe drains and eight manholes.

A number of the manholes were particularly wide and deep with the largest up to six metres in diameter.

“We did the supply for the pre-fabrication and install on site with welding so a combination of precast pipes and the joining of vertical manholes and shafts,” Mr Willingham explained.

The role of BluSeal AKS

Mr Willingham describes the BluSeal AKS product as perfect for the job.

“We had a pipeline of 1.2 kilometres long between manholes so at least 600 metres from the closest shaft. This means that minimal inspection and maintenance was desired so we needed a solution where we can set and forget,” he said.

“This wouldn’t have been achieved with any other solution.”

The BluSeal AKS product was chosen just for this purpose and allowed workers to splice it inside the manhole shafts to provide a fully HTP-lined system.

As mentioned above, civil engineering projects of this scale can often be the subject of headaches and time delays. Fortunately, BluSeal AKS was available to ensure progress could still be made under the most trying of circumstances.  Having Willcen and his team of experts on board certainly helped prevent delays and additional costs being incurred.

One of the incredible benefits of BluSeal AKS, compared to an applied coating – liquid or spray – is that the concrete structure does not have to sit for a month.

“The guys finished their concrete pour on a particular day and the next day they pulled out their form work and on the same day begun to weld,” he said.

“Basically, the coating was finished the day after the concrete pour and the sewer then was switched on.”

Mr Willingham believes that any other coating would have had all the contractors in a holding pattern for a month until they could finish off the coating.

With BluSeal AKS playing an active role in the completion of a major project, this is one product that can add real value to a civil engineering task. For more information on this product or any other of Bluey’s offerings, contact the expert team today. 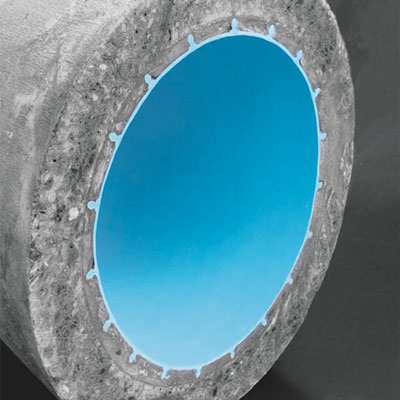